The Dungeons of Sosaria are increasingly invaded by hideous creatures, some of them have been abandoned and no adventurer has set foot there for a long time...
After an emergency council took place in Britain between Lord British and Lord Blackthorn it was decided to activate the "Order of the Hunter", an ancient order that in the past was dedicated to cleaning up dungeons and averting dangers. The Order of the Hunter was also famous for being composed of mercenaries and warriors who had left the armies of Sosaria in a clandestine way, many of them entered the Order precisely to atone for their sins but at the same time persisted in their nature.
For this reason it was decided to hire a commander to hold the ranks of the Order, after deciding that this was the right path to take, Desmond was called to the palace, one of the oldest guards who defended the city of Britain and was entrusted with the task of keeping The Order of Hunter in line by acquiring the title of "Dungeon Master".
Desmond will then entrust the missions and manage the Hunters who will divide themselves into the various Dungeons waiting for some fearless adventurers to want to help the Order.

What is The Quest Dungeon

The Quest Dungeon has been for years on UODreams the main event where you could acquire rich rewards, but there are substantial differences between the old Quest Dungeon and the new:

In the past the quest consisted of a list of secret kill requests of various mobs in the dungeons and at the end, when the list of all mobs was completed a reward was awarded.

The new Quest Dungeon instead consists of a real "quest", in fact it will be possible to start it by accepting the quest "The Quest Dungeon" from the Quest Dungeon Master who will tell you which Dungeon to go to and the list of mobs to be completed in the relative Dungeon.


Guide to The Quest Dungeon 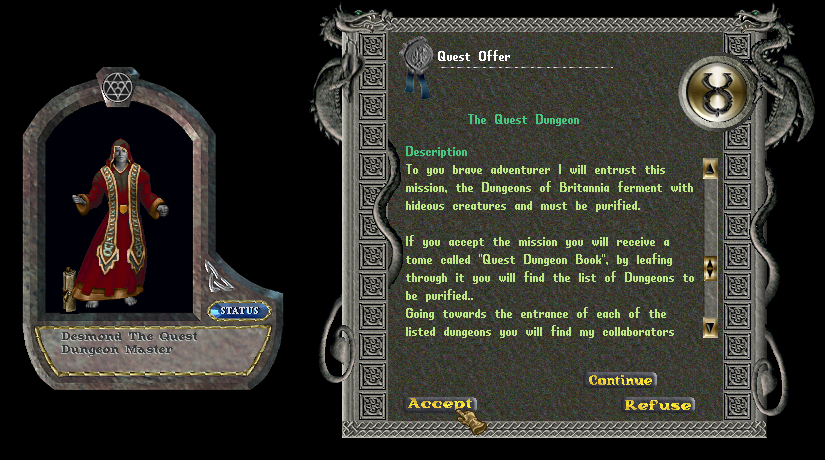 Desmond The Quest Dungeon Master will ask you to complete a Quest Dungeon Book that you can buy from the same NPC at a cost of 10,000 Gold. 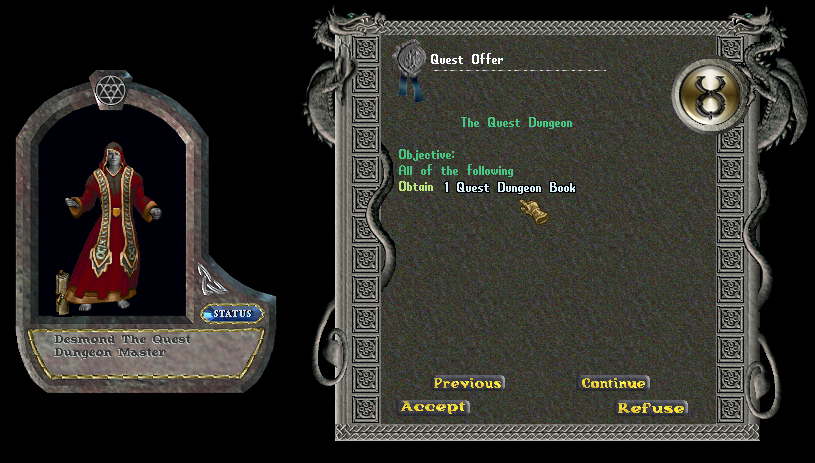 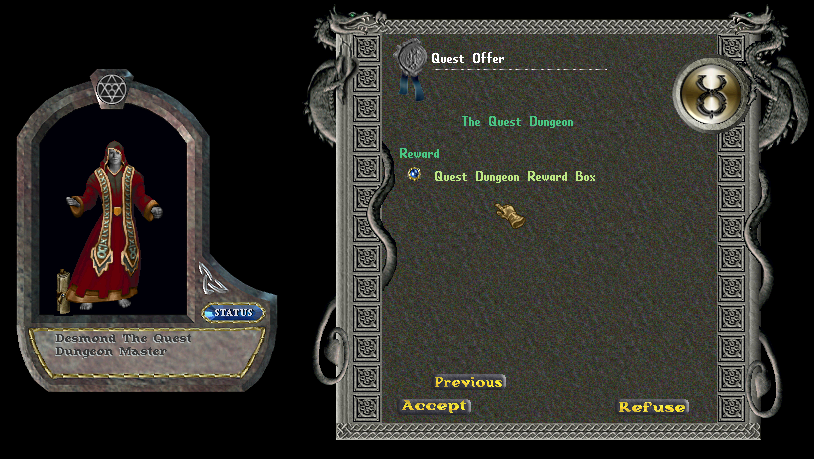 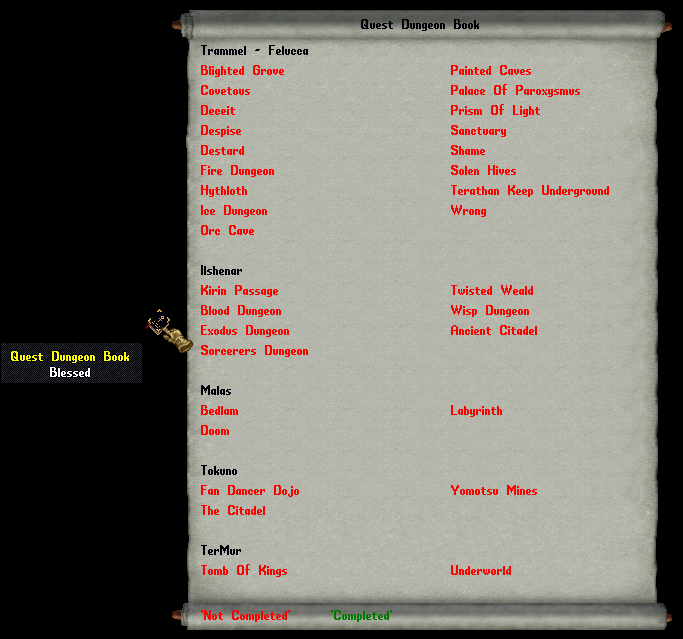 The names of the Dungeons in the list will appear red, to complete a Dungeon you will need to go to the relevant Dungeon and complete the quest of the Hunter who will give you the Token to be inserted in the Quest Dungeon Book, For example, if you complete the "Despise" quest and insert the token in the main Book, the name of the Dungeon will change color to green. When all the objectives are completed by delivering the Tokens received from the Hunters, the book will be completed and will also turn green, at this point it will be possible to reach Desmond The Quest Dungeon Master and deliver it in order to receive the prize. 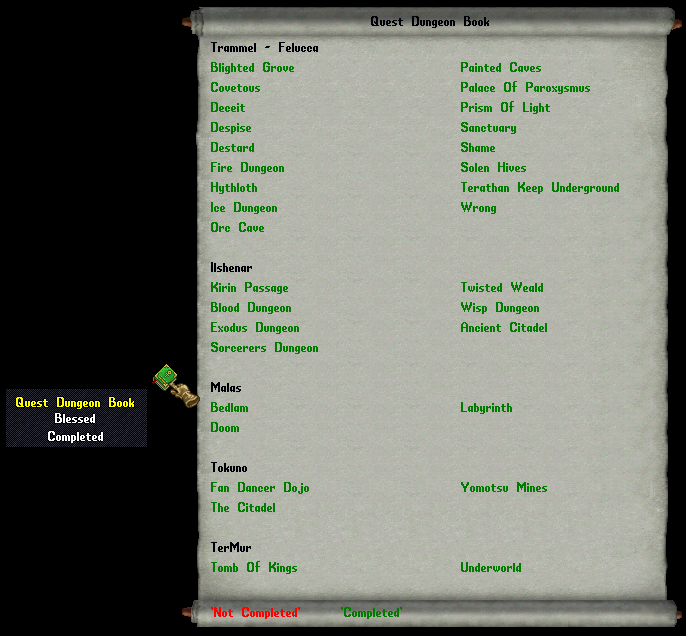 After opening the Quest Dungeon Book you can decide which Dungeon to start the quest from, it will not be necessary to follow a predetermined order, you can accept multiple quests at the same time and go to the related dungeon, the kill of the mobs will have value only if they are made in the related Dungeon of the quest, for the Dungeons that exist both on Trammel and on Felucca the kill will be valid on both facets.

Completing the Hunter's request and returning to him will reward the Token of the relative Dungeon that you will have to insert inside the Quest Dungeon Book.

- The kills of the mobs are valid only in the Dungeon where the quest was taken.
- You can hold more than one Quest Dungeon Book at a time, but each book weighs 20 Stones
- You can repeat the same Dungeon quest several times by receiving the same Token to insert in another Book
- Multiple quests can be taken from Dungeon Hunters at the same time but not from the same Hunter.
- The Quest Dungeon Book and the Token can't be placed wherever you want in the bag and if dragged to the ground they will be deleted.
- Some Quests of the old system such as the one related to the collection of bones to enter Doom or that of the Anthill could cause problems in acquiring the right to kill, it is advisable not to keep them active together.
- If when trying to Deliver the Complete Quest Dungeon Book the npc does not give the reward, 1) Remove the Toggle Quest Item from the book. 2) Resigning the quest "The Quest Dungeon". 3) Pick up the quest from Desmond, Toggle Quest Item on the Quest Dungeon Book Completed and deliver.

When you complete the quest you will receive a Quest Dungeon Reward Box which can contain a Quest Point check of various values or if you are lucky one of the following special items:: 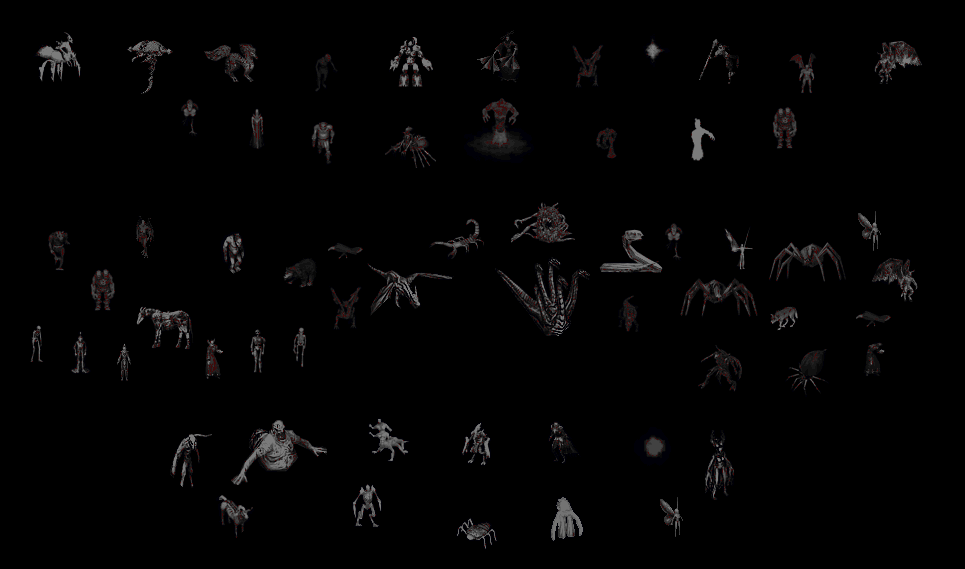